Type your search terms above and press return to see the search results.

“When can we really rest?” The Longest Walk to America

Thousands of migrants from around the globe are crossing the Colombia-Panama border to reach the U.S. Five days inside the Darién Gap, one of the most dangerous journeys in the world. Photographs by Carlos Villalón, Bruno Federico and Lisette Poole.

This story, published in California Sunday Magazine, tells the stories of female FARC rebels at the cusp of ending war in Colombia — with powerful photos by Nadège Mazars.

This story goes deep into the Colombian jungle, to meet a mobile unit of FARC rebels who were still at war while their head commanders were negotiating a peace agreement with the Colombian government. This story revealed the uncertainties and worries rebels held over the peace process,  and the first coverage of FARC rebels from the jungle since peace negotiations had begun over three years prior. With photos by Nadège Mazars. 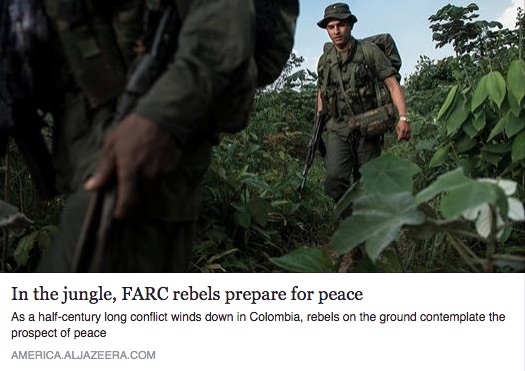 The Devil Underground is a long-form narrative story based on two years of reporting on a war over gold mines between armed groups in Colombia’s conflict. At its center is a grisly massacre, a shadowy capo and a ruthless violence feeding the international gold supply chain. With photographs by Stephen Ferry.

The Devil Underground is available on Amazon as a Kindle Single, or for purchase at The Atavist.

About The Devil Underground:

“Nadja Drost is an intrepid reporter and a masterful storyteller. Her new piece dives deep into the sordid, violent world of gold-mining, and emerges with dark, hard-won truths. An unforgettable story.”   — Daniel Alarcón, author of At Night We Walk in Circles and Lost City Radio.

In Colombia, digging for gold comes at a price, GlobalPost text and slideshow, December 4, 2011.

Barichara, Colombia: Come for the tranquility, stay for the delicious ants. Travel story, The Globe and Mail, June 1, 2011.

Investigative Series, ” A Massacre Explored”: Murder in the Jungle and Suppressed by the Military, GlobalPost, March 16, 2010.

“Border net catches few terror suspects” is part of a special report on the blurring of counter-terrorism efforts and immigration enforcement on the U.S. – Canada border.  The investigation found that massive investments in border enforcement are generating a flood of ordinary immigration charges but few related to terrorism. Albany Times Union, April 19, 2009.

For articles, graphics and photos, see the full report here.  Other versions of the report were published in the Seattle Post-Intelligencer and the Houston Chronicle.

“Scouts’ Dishonor” is an investigative series on how the Boy Scouts of America have reaped millions of dollars from logging and selling donated lands.  This was a nation-wide effort of several Hearst newspapers.  Links are to articles published in the Albany Times Union from January 29 to February 2, 2009.